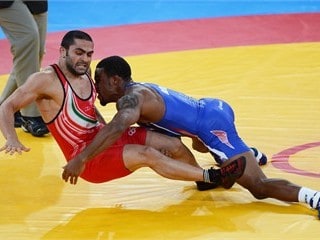 Who has a faster double leg? This dude just scored 2 takedowns in 15 seconds against David Taylor (also on our list) .

With some of the best reflexes and fakes out there, Jordan Burroughs went 69-0 in senior level competition. An incredible athlete and probably one of the best of all time.

We’ve written about this extensively here at StrongerWrestler.com. Dan Hodge was a brutally strong guy and would often leave his opponents bruised and battered because of it.

“The loser is usually the one who is ready to lose. Fight, overcome difficulties, control your emotions – and you will win.”

Another absolute ANIMAL. This guy was feared by everyone he wrestled…Oh, and he has a highlight tape that almost exclusively shows him lifting up 300lb dudes in the air like they were rag dolls.

The man, the myth, the legend. I don‘t think anyone has or ever will out work Dan Gable.

I was a Strength and Conditioning Coach at Virginia Tech when coach Brands was there. When he was first hired, I had the opportunity to meet him, and let me just tell you…he was one of the most intimidating men I’ve ever met in my life. He has an intense passion/fire in him that few can rival. A competitor through and through.

One of the best of all time. 159-0 as a collegian, a Gold Medal, and a few National Championships as a Head Coach.

One of the most exciting wrestlers to watch because, win or lose you know you will see something special.  DT always seems to pull something out of his hat that we haven’t seen before. Truly a special wrestler and I don’t think we’ve seen his best yet.

Thanks to my friends at The Wrestling Insider, I have a new name to add to the list. Many of the comments I saw reflected that Saitiev had it all. Finesse, technique, strength, etc. This makes a lot of sense seeing he had 9 Gold Medals at the World Level. So, he’s in!