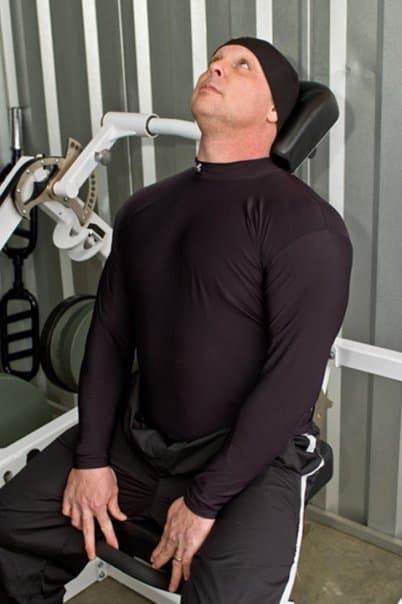 Concussions have been an incredibly prevalent and controversial topic over the past few years. The NFL recently settled a landmark lawsuit, and many other sports, both male and female, are seeing large instances of brain trauma due to concussions. With athletes becoming bigger, stronger, and more physical every year, it seems this problem will only get worse. Thankfully, Dr. Ralph Cornwell is working on changing that.

Recently I had the pleasure to interview a cutting edge neck researcher in Dr. Ralph Cornwell. Dr. Cornwell has worked as a Strength and Conditioning Coach at numerous programs including Westpoint and the Washington Redskins. Since that time, he is now currently traveling the world educating Professional, Collegiate, and High School Sports programs on the benefits and protocol he has set up for training the neck. He is as passionate as he is knowledgeable on neck strengthening, and I learned a great deal from him. Check out his research dissertation here.

I had initially planned on making it a simple interview similar to what you’ve seen previously in the interview series. However, due to his passion in his field, and our shared mutual interest in improving and strengthening the human body, we tended to veer off-topic. I’d like to post some things that I learned from that I believe will help you in your wrestling as well as concussion prevention.

Concussions may not be 100% preventable, but we can get close.

We all know that ACL tears are not 100% preventable, however with the right intervention protocol’s they can be greatly reduced. Because of this knowledge, many athletes’ engage in some form of strength training to help reduce their odds of ACL injury. Unfortunately, while there is plenty of research out there supporting the same idea that a neck strengthening protocol will reduce concussions, there are far fewer teams/athletes’ involved in neck strengthening exercises (1,2).

This needs to change. In addition to the research data linked below, Dr. Cornwell has been taking his concussion prevention protocol on the road all over the country. His results have been staggering. Here are a few examples:

The Minnesota High School that had only 1 concussion the entire year after implementing the protocol.

The elite Ohio Football Team that reduced their concussion rate 55% just by implementing the manual and DVD’s from Dr. Cornwell.

The multiple Virginia State Wrestlers who had multiple concussions in the past, but had NONE the year they worked with Dr. Cornwell. Many also went on to place at the State Championship\

Dr. Cornwell is currently implementing “Project Neck” at various high schools across the country. I’m sure the results will be very similar as well.

A strong neck lends to a strong body

In his research, Dr. Cornwell observed larger than normal increases in basic lifts (Squat, Bench, Deadlift, Clean, etc.) in those who participated in the neck protocol. While correlation does NOT infer causation, this is still a promising side effect. It could be a neural increase or a stability thing, but in reality who cares as long as it works.

You’ve heard the term “Pencil Neck”, right? It’s generally used as a term for someone who’s weak with a pencil sized neck. Don’t be that guy, train your neck.

One sobering topic Dr. Cornwell brought up is the current state of concussion prevention. Sadly, strengthening the neck isn’t “sexy” enough and there’s little money in it. Unfortunately, there is TONS of money out there for helmet makers to continue developing “the next big breakthrough” product, doctors administering concussion baseline tests (which don’t really work anyway), and various other medical interventions that only happen AFTER a concussion.

While all of the former treatments are certainly not a waste of time if necessary, isn’t it time we start working on PREVENTING the problem instead of just treating it?

Women’s necks DO NOT hypertrophy

In his research at Elon, the average neck size increase for the men was 2.5″. The women? 0″ with the highest being .25″. Just like we know women can’t get “big” from weightlifting, they can’t from neck strengthening exercises either. And, while those necks don’t gain size, they do gain strength which is important for sports such as soccer and gymnastics where concussions are very prevalent.

This was a very interesting comment Dr. Cornwell made. And, while I thought about it, it made sense. There is TONS of concussion research in the USA, and TONS of sports science research in both the USA and Bulgaria. There isn’t however, any research on concussions in wrestlers in Bulgaria. Dr. Cornwell has looked and couldn’t find anything. While this could certainly be a coincidence, I do believe it’s not a stretch to say the Bulgarians put a larger emphasis on wearing down the neck and strengthening it then us Americans do.

So, what’s the protocol?

I’m sure you’re chomping at the bit to strengthen your neck now and you want to know what the protocol for Dr. Cornwell’s Neck Strengthening program is. Since this is HIS program, and he wrote the book on it (literally), I’m going to send you to his website to purchase a book or DVD outlining the program, and all of it’s intricacies. For now though, I’ll offer a few small pieces of Neck Strengthening Advice:

1. Train all planes. Your neck will be moved every which way when you wrestle. Make sure you train it for that.

2. Don’t just work the neck muscles. The Traps (Lower, Middle, and Upper) are huge pieces of the Neck Strength puzzle as well. Don’t neglect them.

3. Train all angles. Use the full range of motion and proper tempo.

4. Be consistent. If you want a stronger neck, then train it 2-3x/week. Not once every once in a while.

5. Make it a priority. Do all you can to prevent a concussion. Don’t make Neck training something you might do at the end of your workout if you’re “not too tired”. Make it a MUST every other session.

I’ve seen wrestlers with strong necks bridge themselves out of bad situations. I’ve also seen wrestlers get caught on their back and pinned because their weak necks couldn’t help them out of a bad spot. Work hard to be the first guy. A strong neck will raise your game and keep you safer from concussion trauma. Don’t neglect it.

For some Neck Training, check out the video below:


Thank you to Dr. Cornwell. If you have questions for him, email trainhrd@vt.edu or check out https://www.concussionpreventionprotocol.com/