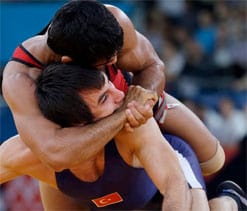 I am finally finished!

The culmination of two years worth of data collection has finally come to an end. If you are one of the wrestlers who took time out of your tournament to let me test you, thank you from the bottom of my heart. I truly appreciate it. For the coaches who loved the idea and allowed me to test their wrestlers at tournaments, thank you. To my intern Ken for helping, thanks; you are the man.

For the past two wrestling seasons, I have been going to various tournaments testing wrestlers grip’s using a dynamometer to see if there is a correlation to grip strength and success in wrestling. In case you’re curious as to what that is, a picture is posted below.

Does grip strength play a role in success at the 3A IHSA Wrestling State Championships?

What were the stipulations?

The athletes I tested had to be:

-A 3A IHSA Wrestler

While I know there are some incredible athletes/wrestlers at the 2A and 1A levels, I did not want to skew the data by testing those athletes. I wanted all of the data to come from the same pool of competition.

How did you break up the findings?

I broke the data up two weight classes at a time, and in the following groups:

NSQ: Non State Qualifier. Athlete who did not qualify for the IHSA 3A State Championship.

SQ: State Qualifier. Athlete who qualified for the IHSA 3A State Championship.

SP: State Placer. Athlete who placed in the top 6 at the IHSA 3A State Championship.

SP-NR: State Placer-Nationally Ranked. Athlete who placed in the top 6 at IHSA 3A State Championship and was ranked in the top 20by flowrestling.org at the time. (Note: While this is rare, it still does happen…Illinois is a TOUGH State Tournament.)

SF: State Finalist. Athlete who made it to the Finals of the IHSA 3A State Championship.

SF-NR: State Finalist-Nationally Ranked. Athlete who made it to the Finals of the IHSA 3A State Championship and was ranked in the top 20by flowrestling.org at the time.

How do I read the graph?

Good Question. I tested both the Right Hand (RH Grip) and Left Hand (LH Grip). We tested in Kilograms. The Y-Axis (down-up line) is the LH Grip, and the X-Axis (left-right line) is the RH Grip. A good grip will be High and Right. You may occasionally see a very high, but not very right grip, or vice versa. This is due to an imbalance, or “sports adaptation”. We will discuss this more later in the article.

Without further ado…here are the findings

Takeaways: You may notice there are two state placers who did not fair well at the test. I attribute this to the fact there are many Freshman/Sophomores in this age bracket who are simply very skilled and very technical. They do not rely on strength yet to win their matches, and because they are generally competing with freshman/sophomores as well, they are not at a strength disadvantage.

Takeaways: I think this is HUGE, and also a theme we will see in the following graphs, not only did the majority of the athletes who have strong grips do well, the best of the best nationally ranked ones had the highest tested grips. I don’t think it’s a coincidence they were also state finalists.

Takeaways: I had a few anomaly’s in the data. Over the course of the study, I had a few surprisingly weak grips from very good wrestlers, and some surprisingly strong grips from wrestlers with slightly less success in the sport (one of whom told me “He’s only been wrestling one year”), however, the findings are still fairly consistent and show the higher level wrestlers tend to have stronger grips.

Takeaways: Again, same thing. The successful wrestlers have the strongest grips. While it is certainly possible to be a successful wrestler with a weaker grip, it does seem that a weak grip could be a road block on your way to the podium.

Takeaways: This is a great graph. Far and away the best wrestler had the best grip. The Non State Qualifiers weren’t even close.

Takeaways: Are you noticing the trend yet? It seems that the upper weights require more emphasison strength than the lower weights did! I firmly believe that what I stated in the “106-113” pound section is a main reason. Lower level weights tend to be underclassmen, which means a lot of times strength is less of a factor than in the upper weights! However, since that is the case, don’t you think as a lighter weight underclassmen you should focus on strength? It would put you at a large advantage!

Now we know we need a strong grip for wrestling. But let’s talk about some other observations…

You need technique too.

This is an obvious one. You can be the strongest and best conditioned athlete in the world but if you don’t know how to play your sport, you will never be successful. Make you are strong and also have great technique!

Again, I don’t believe this was a huge surprise. Occasionally we had a placer or finalist without a good grip. Things can happen at the state tournament…upsets, your opponent missing weight or being disqualified, or maybe they had a great bracket draw. However, I don’t believe it was coincidence that the Nationally Ranked wrestlers performed the best. Being nationally ranked does not mean you had just one good tournament, it means you are consistently good. And it seems that in order to be consistently good, you need a strong grip.

One thing I found that I was not expecting was grip imbalances in very many wrestlers. When I thought more about it though, it made sense. Many wrestlers tend to wrist control with the same hand the majority of the time. Because of this, that grip has a much larger amount of volume to get stronger and creates an imbalance. This is called a “Sports Adaptation”. I recommend you do your best to fix the imbalance because if you have an opponent attacking your weaker side, you don’t want to be at a disadvantage.

Lower weights do not rely on grip strength as much

While it helped, the lower weight wrestlers’ success was not as heavily influenced by grip strength. There were certainly some who did well with it, but it was not a necessity as it seemed to be in the upper weights. Like I previously stated, I believe that is because these lower weight athletes are generally underclassmen who do not have to compete with as many developed upperclassmen as they would in the upper weights.

How do I get a stronger grip?

There are many ways. I went over a few in this previous article on the grip. For now, make sure you do your rope climbs and pull-ups. Additionally, don’t be that guy who only does what he is good at in the practice room! If you are afraid to tie up and use your grip because it is weak, then your grip will never become strong!You must give it the opportunity to get stronger and develop, and you must swallow your pride in practice to do so. For now, here is an exercise I give my athletes to do on their own, at home. It is incredibly simple, the “equipment” is readily available, and it’s something you can do while watching TV.