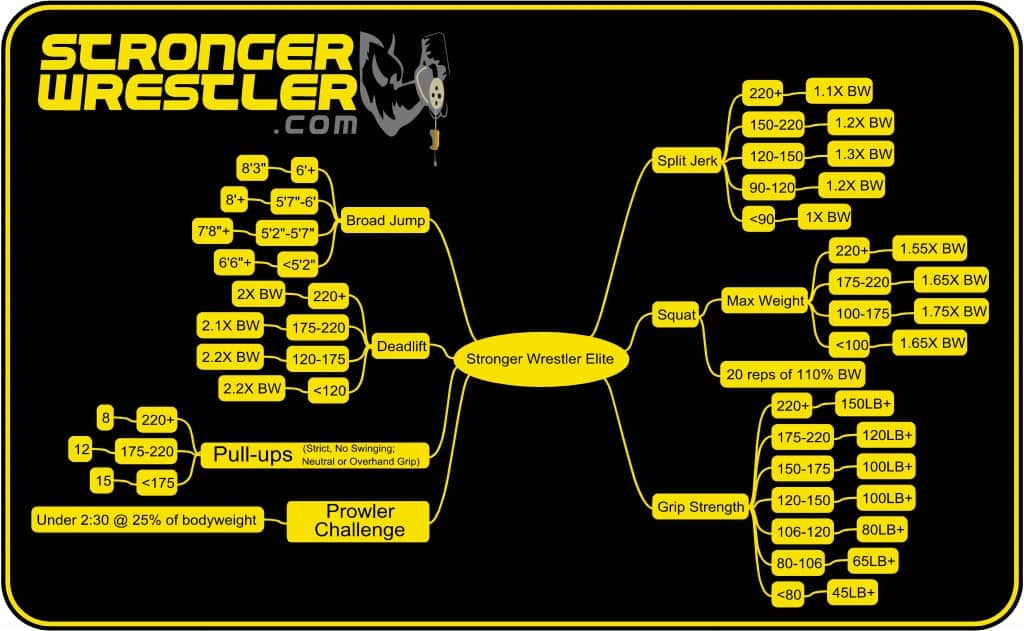 It’s finally time. You’ve worked so hard this off-season to get stronger, better conditioned, and more powerful. You step up for your first match ready to show off your new found strength and…you get bullied. What happened? Where did you go wrong, and what can you do to fix it? Today we’re going to talk about testing for wrestling, and how we can make sure we’re getting strong specifically for wrestling.

I think we should know by now that things like Bench Press and Triceps Push downs aren’t the foundation for a solid wrestling strength program. For an example, here is a chart I keep in my facility for our wrestlers (specifically high school, with some middle school athletes) to strive towards. I am still playing with numbers and exercises but I have found that my athletes who hit all of these numbers tend to be some of my best on the mat.

In the needs analysis of wrestling post, I spoke of some of the challenges we face in wrestling and what we need to address strength wise. Here’s why I have these exercises in the chart and how to properly use the chart:

These are the foundations a program is built on. While they don’t always get a lot of love in the mainstream, any strength coach worth his salt will use these (or variations) in their programming. While I use many variations (Front/Back/Spider Bar/Box for squats and RDL/Trap Bar/Deficit/Snatch Grip for deadlifts), the testing itself is done with a conventional back squat and conventional deadlift. Studies have shown how important maximal strength, muscle power, jumping height, and back strength is when it comes to being an ELITE level wrestler (1,2,3). By squatting and deadlifting, we are increasing all of those attributes.

I have come up with these numbers by comparing a few college wrestling program strength records, and my own athletes’ lifts. Further, while researching I found one study that examined the physiological profile of elite Iranian Junior Wrestlers and put their squats at 1.7x their body weight on average (3), which is right around my numbers. Because lighter athletes are always stronger pound for pound, the numbers vary depending on size.

Squats must be at or below parallel with a straight back. Deadlifts are to be done with a overhand or alternating grip and straight back. Sumo or Conventional allowed.

I feel the Split Jerk is a good expression of upper body and lower body power in addition to trunk and shoulder stability. I also believe that vertical pushing (Push Press/Split Jerk/Etc) has a greater carryover to wrestling than horizontal pushing (Bench Press) does because wrestlers lift and pull, but rarely push. Again, I compared a few college wrestling programs strength records, and my own athletes’ numbers. I feel these are good benchmarks to work towards as upper body strength and power are very important aspects in wrestling (1,2,4).

Split Jerk must have arms locked out with both feet returning to starting position while stable for a brief second. Push or Split Jerk allowed.

This is a no-brainer! If you have ever had a wrestling coach who didn’t encourage you to do your pullups, then get away from him because he is awful! Pullups predominantly work the Lat and Bicep muscles which are our primary pulling muscles(5). In fact, it’s been said that Bobby Douglas(ISU coach) told Cael Sanderson that if he wanted to be an Olympic Champ, he should do 50 pullups a day! Pullups should and always will be an integral part of a wrestling strength program.

Pullup testing should be done overhand with complete arm lockout at the start of every rep, chin reaching above the bar, over hand grip, and knees not allowed to pass 90 degrees.

Elite wrestlers have STRONG grips(1,3) . The ability to grab a wrist or body lock and not let go is a huge advantage and really discouraging to an opponent. While there are many types of grip strength, we measure it by using a grip dynamometer. I am confident in my numbers, and my current grip strength research(more on that later!) has backed me up thus far.

Grip Dynamometer testing is done with the palm facing in, with the elbow flexed at a 90 degree angle. You may not “jerk” the handle.

While one study showed Vertical Jump as a factor separating Elite from Non-Elite wrestlers(1), there have at present not been an studies measuring Broad Jump. I test vertical, but do not keep it on the “Elite” board. I believe the broad jump has more of a carryover to wrestling because you must produce horizontal force, not vertical. While both absolutely have their place, I chose to include the Broad Jump.

Broad Jump testing is done by marking a starting line and jumping as long as you can. You must stick your landing and measurement is taken from the heel closest to the starting line. You get 3 jumps.
Prowler Challenge:

How do you take one of the most hated pieces of equipment in the gym and make it worse? Make a challenge out of it! The prowler is a great piece of equipment for any athlete, especially a wrestler. It is very important to have a high lactic acid tolerance and great aerobic and anaerobic conditioning, which I believe the prowler provides. If you do not have a prowler, you could also use sprints as a baseline for improvement(6). We use both, but have numbers for the prowler.

The Prowler Challenge Test is done by timing 6 working sets of 40 yard prowler pushes each with 25% bodyweight on the prowler and a minute rest between each set.

The Prowler and Athletes have a strong Love-Hate relationship

The reality is you can have all the strength in the world but if you lack in technique you will never reach the top of the podium. However, if you find yourself in the top level of competition but never beating the best of the best, see how you stack up to these numbers. Chances are you may be lacking in a few areas. If you are, then get to work because strength increases in the proper areas can absolutely take you from good to elite (1,2) if you work hard at it.

As said before, this list is a work in progress. While I do test my wrestlers in other ways (Snatch, Vertical Jump, Dips, etc) I do not have those in the “Elite” group of exercises. If I were to add to it, I would add Snatch at around .9-1.1x Body weight depending on the individuals size. How do you test your wrestlers? Comment below!