The Top 5 Most Athletic Wrestlers at #WNO2014

1. of or pertaining to athletes; involving the use of physical skills or capabilities, as strength, agility, or stamina:

There are many great wrestlers out there. Some who showcase incredible technique that wows us. Some have unbelievable strength that impresses us. Some demonstrate speed and quickness that awes us. Some present conditioning that amazes us. This article is meant to discuss those who have the latter 3.

A little over a year ago, FloWrestling’s 2nd annual Who’s #1 event wowed the wrestling community from start to finish. I had the opportunity to go out to the inaugural event last year to watch one of my athletes’ compete and it was an incredible experience. Flo pulls out all the stops and delivers not only great wrestling, but also a very attractive and well put together package for the casual and new wrestling fan. In case you missed it, check out the highlights below:


Great wrestling was shown all around, and each wrestler who competed was an incredible athlete. Who were the best athletes there though? We know how important athleticism is for a high school wrestler transitioning to college. In college, everyone is bigger, faster, and stronger. Here are the 5 wrestlers who stood out to me the most athletically and who I believe would have no problem jumping right into the college ranks right now.

While he may not quite weigh enough to compete in college yet, he certainly has the physical tools. Cade was quick, strong, and show off a few Aaron Pico-like snap downs. It was clear that he was the much more physically dominant man during tie ups as he moved his opponent with relative ease. The 106 lb weight class is usually not filled with physical powerhouse’s due to the generally younger age of those competing in this weight class (check out an article I wrote on grip strength which illustrates this point here). That being said, it was clear that Cade doesn’t subscribe to that theory as he is not only a great technician, but a great athlete on the mat as well.

If you want to know why Matt Kolodzik belongs at #4, then start by watching the 3rd period of his match with former #1 Ke-Shawn Hayes. Kolodzik was incredibly physical in riding him and not giving him an inch of space. There was one point in the 3rd where he made picking up his opponent and mat returning him look as easy as picking up an 80 pounder.

Matt Kolodzik completely wore down Hayes in the 3rd, and looked great in the first two periods as well. He didn’t seem to be in any danger and controlled the whole match from start to finish with a physical presence displaying speed and strength.

This dude is a powerhouse! About 10 seconds into the match Bobby Steveson showed us a strong set of hips in shrugging off his opponents’ takedown attempt. On the two takedown’s he scored, he showed us great speed and quickness, especially for a big man. And, in the 3rd period, well, he did this:

I believe one of the comments on Flo’s website said it best with this:

Can Bobby walk through walls? He’s a TANK!

Minnesota is getting a STUD.

Are you kidding me?? The longest high school match ever at 32+ minutes. These guys should both be proud of themselves. The thing that impressed me the most wasn’t the amount of time they went, it was how fast they were STILL in overtime. Power Endurance is not just about having gas in the tank at the end of the match (or overtime), it’s about being able to still exhibit a high power output at the end of the match! It doesn’t matter how in shape you are for a long match if you can’t shoot or throw or mat return with power, speed, and authority. These two gentleman both showed great power endurance, as well as incredible heart to give us wrestling fans one of the most memorable high school matches of all time.

Check out the highlights of their match here 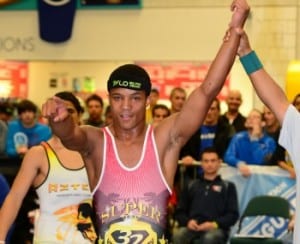 Was there even a question here? Mark Hall’s Strength, Speed, and Stamina were on full display here as he cruised to a Major Decision over the #1 pound for pound wrestler in the country. It was clear he was the more athletic wrestler from the start as he easily fought for and took double underhooks for his first takedown of the night. From there, he continued to physically dominate his opponent utilizing strong riding, brutal mat returns, and even showcasing an incredibly strong neck to bridge out of a very bad position. (Learn more about developing a strong neck here)

I have to admit that @Baybee_Marky is a beast

Mark Hall has been a physical and wrestling prodigy for a while now and it clearly shows. He is world class not only in technique, but in athleticism as well. I’d love to hear what his Strength and Conditioning Program has consisted of over his career.

If you watched some of these videos and realized you have the technique, but are lacking in the athleticism then you need to get to work! Wrestling season is upon us but there is still time to get stronger, faster, and increase your conditioning level. Follow us on facebook or twitter for tips and tricks and check out the following article below for a FREE In-Season Wrestling Strength Program.

For a free eBook and Downloadable Pull-up Program fill out your name and email below.